Hand Grenades
The Hazardous Environment Combat Unit Marine, more commonly known as the Grunt is the standard infantry soldier unit in Sven Co-op that can serve as an ally or an enemy. Both share the same type of uniform, weaponry and equipment, bear in mind that allied bots wear green M81 woodland camo uniforms instead of gray Limited Objective Experiment #1 urban camo.

They are the main force in Half-Life and as allies in Opposing Force, in Sven Co-op, these grunts are trained and will kill anybody on sight.

The strongmen of the group, these troops work in squads to take down even the hardest threats, but not a match against Black Ops Assassins or bigger alien monsters. Most will carry submachine guns and assault rifles in their arsenal, but some are much more heavily armed and will carry chain guns or shotguns. They are best to be with, as the Medic is not suitable in battle and the Engineer is a potential target, these men take down threats better with bigger weapons. But in most, you will find 2 or more in some maps, while medics take all maps in view.

Grunt allies can carry MP5s, M16s, SAWs or SPAS-12s, and some grunts have the use of the Rocket launcher. All soldier units are protected by their PCV (Powered Combat Vests). They are strong enough to hold for long. They can't carry Miniguns like their Sergeant superiors.

Work as squads to take down high level enemies, and use them to cover fire for you. Use tactics when dealing with enemy soldiers- using brute force with the SAW or SPAS-12 can be very risky, so instead stick with small arms such as handguns, the SMG or Assault rifle and make use of cover and support fire. Make sure to use hand grenades. 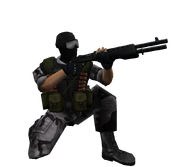 Squad Leader with a Submachine Gun 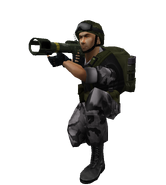 Demolition Grunt with a Rocket Launcher

Community content is available under CC-BY-SA unless otherwise noted.
Advertisement